As you will see from other posts I am a Cub Leader with the 29th Dublin Scout Troop in Blackrock Co Dublin. On Sunday 20th may 2012 we took them climbing in Dalkey. Emma and Kevin had set up Drinker Direct (VD) and I help them to anchor Drinkers Delight (VD). However Delight proved o be too much of a stretch for the Cubs so Emma took it down and rigged Diphthong (S) instead. All the kids had a ball and got two climbs each. I belayed for the first two groups, approx 12 kids and had to go to another base for the third session.

When the Cubs were finished I had an opportunity to climb Diphthong and quite enjoyed it, there were a couple of interesting moves. The move right at the end wasthe tricky one, I could not reach by stretching so had to leap for it. I was apprehensive as I though of the slagging I would get for falling, but I decided I rather be slagged for falling after trying rather than not trying. I made the leap, more of a little hop really, and got the hold. I was thrilled.

A fine route with lovely climbing up the top wall. Start as for Triptych at the vertical drill hole. Up past the drill hole and move right onto the spacious ledge. Climb the wall above on its right side by means of the prominant quartz vein, swinging right to finish.

A much better route than its namesakes. Start below the right-hand of two leftward trending corners. Climb the corner to a ledge, and continue up the steeper groove above to another ledge, junction with Drinker’s Direct. Step left and finish up a short groove.

and the image from the book: 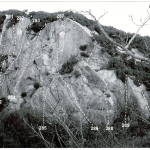